KIRKUS REVIEW for Chester Nez and the Unbreakable Code

For young readers, a nuanced, compassionate biography of a Navajo Code Talker. 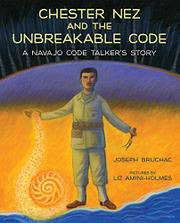 Like many Native American children, Betoli, a Navajo boy, was taken from his family to a missionary boarding school, where he was forbidden to speak Navajo and forced to change his name to Chester. He endured the painful process of having his long hair shaved, forlornly depicted in a stark image in which black crows with outspread wings carry away the strips of his hair. Summers spent at home, immersed once again in the love, language, and culture of his people, gave him the strength to carry on. As he got older, Chester adapted as best he could to the forced assimilation. He joined the military during World War II and became one of the first Code Talkers, who used their own language to undermine the Japanese, efforts that helped to end the war. Bruchac’s story dares to go beyond the war in highlighting the postwar trauma that Chester experienced, demonstrated in a beautiful yet haunting illustration that symbolically captures his pain. This tale of a real-life Code Talker humanizes the main character by giving readers the whole picture of his connectedness to home and family, which is reinforced in Amini-Holmes’ textured paintings, which resonate on an almost ethereal level.
A perfect, well-rounded historical story that will engage readers of all ages. (author’s note, partial code key, timeline) (Picture book/biography. 6-10)
Posted by Liz at 12:25 PM No comments:

Fantastic news about CHESTER NEZ AND THE UNBREAKABLE CODE. First, the book has been named a Junior Library Guild Selection for April 2018, which means that the Junior Library Guild has named it a gold standard book. Second, Kirkus Reviews has given the book a STARRED REVIEW!! I am proud and thankful! Nice mentions about my artwork https://www.kirkusreviews.com/book-reviews/joseph-bruchac/chester-nez-and-the-unbreakable-code/ 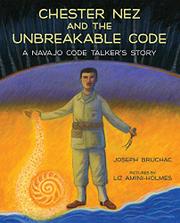 CHESTER NEZ AND THE UNBREAKABLE CODE